Lately I have wondered what it would have been like to sit on the sidelines and see this story unfold. To be someone who knew deeply who God was and to watch him display his love in such a grand way. To be someone who had doubts and had gotten caught up in others’ ideas and need a moment with the Lord to bring clarity and identity. Or to be someone who had no idea who this Lord was that everyone was coming for.

I wonder what that moment would have felt like. To listen to men who called themselves prophets calling for hours upon hours for Baal to show himself. Listening to them cry louder as the one prophet for the Lord taunted them. Was Baal sleeping, was Baal to busy for this moment, was Baal real?

When Baal didn’t show up would the air be thick with questions and uncertainty as the one thing I had
placed my trust, faith and hope in had shown powerless in a day when power was needed the most? Would I have felt let down that the god I was looking for left me empty and fireless?

Then we would sit and watch Elijah rebuild, cut up, and pour water on the sacrifice…. and pour water on it again and then one more time. Not only was the offering wet but the wood was wet, and the trench was filled with water. Was his God big enough for this, was this God powerful enough for all this?

At the time of sacrifice, the prophet Elijah stepped forward and prayed: “Lord, the God of Abraham, Isaac and Israel, let it be known today that you are God in Israel and that
I am your servant and have done all these things at your command. Answer me, Lord, answer me, so these people will know that you, Lord, are God, and that you are turning their hearts back again.” Then the fire of the Lord fell and burned up the sacrifice, the wood, the stones and the soil, and also licked up the water in the trench.”  1 Kings 18:36-38 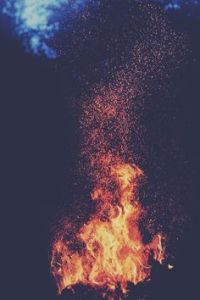 There are times when we all find ourselves needing a fire to come in and reign in our lives–for the power of God to move in such a way that nothing else is an option. And God’s power is more than enough for us. At these times Christ is needed and Christ is found. My prayer is that wherever we find ourselves today, we would know we are loved by the One who can rain fire down on whatever we are battling.

About the Writer:
Liz, just a girl who spends her days in seminary classes, spends her afternoons interning with First Baptist Dallas Women’s, spends her evenings with her friends laughing and challenging the definition of community to be something much deeper. If you need her you can probably find her watching Dancing with the Stars while on Pinterest, challenging the worldly norm of a 28 year old.

Beach or mountains? I will choose the beach every time. I love the beach. I love to stand with my feet in the warm sand, with the cool waves just barely washing up to my ankles, and to stare out over the vastness of the ocean. The colors captivate me, pulling me in, bringing peace to my soul. Blue. Blue so deep, yet vivid and bright. I attempt to soak it all in. I get lost in the beauty surrounding me. The sound of the ocean drowns out the world, and I am filled with joy. I love the peaceful shore, where the tiny waves collapse on the sand. My husband loves the more active beaches, where the more substantial waves roll in and crash on the shore. He loves to play in the waves, dive into them, and body surf back to the beach. I’m content to stand on the shore and watch him having fun. 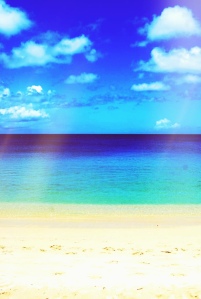 The truth is, I fear the ocean. How can something so gorgeous and peaceful be so powerful and mysterious? I can not fathom the depths of the ocean or understand the power that each wave possesses. The ocean humbles me, reminding me of how small I am, how weak I am. The ocean can be forceful and unforgiving, and I fear it. I am unable to comprehend its vastness and unknown variables. I am fascinated by it, but I will continue to fear it. I fear the ocean, but I love and respect it, too.

How much more should I fear the creator of the ocean? I am unable to comprehend the power of God, the creator of all things. He has the power to be forceful and unforgiving, but He has been so good to me. I can not fathom the depths of His grace or understand why He would extend His grace to me. I am pulled in by His love and filled with joy. I am captivated by His word and made painfully aware of my weaknesses. He engulfs me with peace and love. I fall to my knees, in awe of His righteousness and mercy.

And He has said to me, “My grace is sufficient for you, for power is perfected in weakness.” Most gladly, therefore, I will rather boast about my weaknesses, so that the power of Christ may dwell in me. 2 Corinthians 12:9

I am weak. I can not fathom the depths of my weakness. I know I am weak, but my pride is constantly trying to convince me otherwise. My pride. It is a daily struggle to overcome my pride and ask for God’s help. I find myself in a daily battle, to allow myself to be weak, so that the power of our Holy God can be made perfect.

Great is the Lord, and highly to be praised,
And His greatness is unsearchable.
One generation shall praise Your works to another,
And shall declare Your mighty acts.
On the glorious splendor of Your majesty
And on Your wonderful works, I will meditate.
Men shall speak of the power of Your awesome acts,
And I will tell of Your greatness.
They shall eagerly utter the memory of Your abundant goodness
And will shout joyfully of Your righteousness. Psalm 145:3-7

About the Writer:
Meghan is a wife and stay at home mom to two amazing little boys. She has a heart for service and enjoys working on the Oasis Leadership Team at First Dallas.

Growing up a pastor’s daughter meant many things for me during the course of my spiritual life. This meant I had the important job of riding my tricycle around the church as my Dad locked up, bedtime consisted of my Dad explaining different religions as I fell asleep, and the majority of sleepovers included drawing a timeline of Revelation. Just the normal childhood, right?

Somewhere a long the way I decided I was tired of playing by God’s rules. Other options looked more apt to meet my most pressing needs and wants. I knew God’s commands. But I decided God would understand if I just needed a break from Him for a while. I had no idea how that decision would cause me to end up further from God than I ever imagined. Through what I call “the lost years” of my life, God relentlessly pursued me and never left me.

I have learned through my years as a counselor that I’m not the only one who fears coming back to God. The shame of sin keeps many people out of church and fellowship with God. Many times we rely on what other people think about us to conclude what God must think of us. Since we are human, and only know other humans, we have the propensity to attribute human characteristics to God. We conclude things such as, “If my Christian friends didn’t accept me because of what I’m struggling with, then that must mean God won’t accept me either.”

The great news is God is unlike anyone you or I have ever known! Isaiah 55:9 says, “For as the heavens are higher than the earth, so are My ways higher than your ways, And My thoughts than your thoughts.” God’s thoughts and ways are beyond our comprehension. His plan for us is big enough to include our mess-ups. God is not confined by time, place, or our decisions. His heart and desire is for us to come back to Him regardless of what we have done. We can become discouraged when we focus on our sin instead of God’s power. But the hope of the gospel is God loves to redeem people, in fact, He specializes in it!

My favorite story in the Bible is The Prodigal Son (Luke 15). The most powerful verse is Luke 15:22, “So he got up and came to his father. ‘But while he was still a long way off, his father saw him and felt compassion for him, and ran and embraced him and kissed him.” When we desire to come back to the Father, God runs to embrace us. If you’re wondering if God wants you back, He does! God is not mad at you. God desperately wants a relationship with you. I never could have imagined how God could redeem my life after my “lost years”. I can say with confidence He wants to do the same in your life. Will you come back to the Father who loves you?

About the Writer:
Julia is a counselor at Meier Clinics where she specializes in treating teenagers and women struggling with eating disorders, depression, anxiety & self-harm. She is the Teaching and Creative Consultant for the Student Ministry at First Baptist Dallas and a professional youth speaker for Just Say Yes. Julia has served in student ministry alongside her husband for the past 7 years. Julia has a heart to see people experience the same freedom through Christ that she has experienced!

I sometimes think we see God as a genie in a bottle, and we believe that the purpose of His power is to make our wishes come true.

It was nearly three years ago that my husband and I sat in the office of an infertility clinic and received the prognosis that we had about a 3% chance of having children “on our own.” For a few years we had been praying for a biological child, and we had tried every suggestion the doctors had given, only to land in this place. As we sat there, we felt a mixture of defeat and sadness, but oddly enough, we also felt peace because, at last, we were beginning to see God’s plan. He was calling us to adoption.
I never doubted the power of God to allow us to conceive.

Jeremiah 10:12 says:
It is he who made the earth by his power, who established the world by his wisdom,  and by his understanding stretched out the heavens.

Since God could do all of that, I knew without a doubt that He was powerful enough to give us a

About the Writer:
Gabby Brown is a daughter of God Most High. She is married to her best friend and she is the mother of two amazing little boys. She leads the adoption ministry at First Baptist Dallas, and supports her husband in his role as teacher of the Growing Roots Sunday School class.